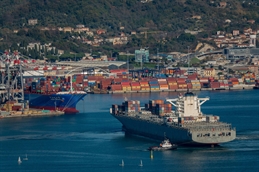 Contship Italia expects trade volume from Asia to continue growing in the next few years with a boost seen from Italy’s move early this year to join China’s Belt & Road Initiative (BRI).

The Italian container terminal operator said shipments from Asia have seen steady growth over the past five years – from both China and Southeast Asia – and Contship is currently investing in infrastructure at the La Spezia Container Terminal, a gateway port operated by the Contship Italia Group, as it sets its sight on handling double the volumes in the short to medium term.

“La Spezia Container Terminal is expanding its capacity with US$230 million of private investment that will increase the capacity from 1.4 million TEUs to 2 million TEUs and further increase the ratio moving by rail, from the present 32% to 50%,” Daniele Testi, marketing and communications director at Contship Italia, told Asia Cargo News.

“At the end of the expansion, La Spezia Container Terminal will be able to handle 23,000+ TEUs ship if carriers decide to deploy this type of tonnage in the Asia-Med trades,” he added.

“We need to keep pace in the era of mega containerships. Once the two new berths are completed, LCST will be able to offer four deep-sea berths including the capability to handle the biggest ships on the water,” Testi said.

Total volumes exchanged with China alone via La Spezia account for 20% of the port’s total throughput.

“Our target for the short- and medium-term is to almost double the volumes exchanged to/from Asia with Switzerland via La Spezia (+20.000 TEUs/year) and to also establish a new southern gateway option to southern Germany and Austria being able to offer one round trip block train per day, five days a week,” Testi said.

Contship Italia hopes to take advantage of the business opportunities of the Belt and Road and improve global connectivity, noting how analysts expect southern European ports to become “more central” for east-west seaborne trade upon completion of more BRI projects.

“Italian trade with China has grown steadily in the past five years, and the BRI initiative is bound to spur this growth further,” Testi said.

He said there are many opportunities for Italian companies to participate in BRI projects, with Italy being the second-largest manufacturer in Europe, and that the “seaborne and rail-borne freight movements will be rising in the next few years.”

La Spezia, in particular, is prepared to take advantage of the possible increase in demand, citing current investments being done on port infrastructures and related rail connections that will improve capacity by 30%.

Contship Italia is also seeking to promote La Spezia as a southern gateway alternative for goods coming in from Asia to Europe with the proposition of a “significantly cheaper and faster” route.

“Forwarders wishing to get their cargo into southern, central and northern Europe benefit from an alternative option to the traditional shipping route into Europe via the northern ports, saving transit times, bunker and inventory costs,” Testi said.

The new International Maritime Organization’s IMO 2020 regulations will also increase bunker costs significantly, and Testi said ports in Italy offer a great opportunity to stop in the Mediterranean and save on bunkering and transit time.

“By using La Spezia, shippers can reduce transit time and enjoy better cost saving. For instance, a shipment from Hong Kong to La Spezia cuts the voyage distance by 2,000 nautical miles, which is 23% less compared to Hong Kong to Rotterdam,” he added.

La Spezia is also linked via Melzo directly to Switzerland, Germany, Austria and the Benelux countries, which means that global shipping lines calling at La Spezia can serve multiple markets with a single call with 200 trains service per week.

Despite this, Testi noted that ports and terminals in southern Europe generally still lag behind those in northern Europe in terms of operating efficiency levels, particularly with the loosening of ownership controls which has resulted in a significant upswing in direct foreign investment, especially from China.

“All ports in southern Europe and across Europe, in general, face the challenges of competitiveness, digitalization and decarbonization,” he said. “For competitiveness, infrastructure development remains a big priority and this is not always about increasing capacity. It is also for many other reasons, including climate, environmental reasons, safety and security.”

Despite the current global uncertainty, Contship said it remains positive on Italy and Europe’s trade relationship with Asia and China, in particular, as the EU’s largest source of imports and its second-largest export market.

“China is now one of the largest partners of Italy in terms of imports and exports,” Testi said, noting that bilateral trade volume as of November 2018 reached US$48.25 billion, more than the total for the whole of 2017, making Italy China’s ninth-largest export destination and third-largest source of imports.

Testi said that although Chinese imports to Italy decreased 3.5% year on year due to the economic slowdown, Contship Italia remains very positive about long-term trade growth between Asia and Italy.

“As Europe’s second-largest exporter to Asia in terms of physical goods, we think Italian trade with this dynamic region will continue to grow for many years,” he added.