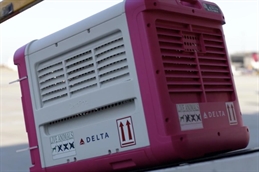 Delta Cargo has raised the stakes in handling live animal shipments with a new pet travel product developed in collaboration with CarePod, a Singapore-based pet technology company with which the airline formed a partnership in 2018.

Airlines and forwarders are raising their game in handling live animal shipments. The latest move came from Delta Cargo, which introduced a new pet travel product developed in collaboration with CarePod, a Singapore-based pet technology company with which the US airline formed a partnership in 2018.

After lengthy research and a two-month trial period, the pair unveiled a pet carrier device that is meant to take pet travel to a new level of comfort for humans’ best friends. The CarePod travel box is made of industrial-strength walls that are insulated to protect the animal inside against potential temperature variations.

Multi-layered windows and doors are fitted with specially angled blinds to block out visual stress. The unit is equipped with a built-in hydration system that automatically replenishes the spill-proof water bowl.

Through an enterprise-level GPS tracking and monitoring system that connects to Delta’s special control centre staffed with trained experts pet owners can follow their animal’s journey from their mobile devices.

Initially, Delta is fielding the CarePod at eight major US locations. Management intends to roll it out across its US network. In a number of locations, the airline also has temperature-controlled holding areas and vehicles to minimize exposure of the animals to weather conditions.

Other airlines have also been refining their live animal transportation service. Air Canada has been working on installing Bluetooth tags in kennels and on aircraft to monitor ambient conditions during flight better, a process that is expected to be completed this year.

The deployment of technology and new solutions has been complemented with the recruitment of animal experts. For its new service, Delta has also specially trained ground handlers.

The US carrier is not the only airline that has teamed up with specialists to hone its service. Since early last year, IAG has been working with PetAir UK, a pet transportation firm run by vets.

CHAMP Cargosystems joined the Animal Transport Association last year to exchange information and develop a partnership with experts with a view towards creating improved solutions.

In November the cargo IT provider and the industry body teamed up with Arioneo, a French company that specializes in the development of solutions to provide accurate insight and analysis into performance and health issues of horses.

Together they are engaged in a two-year study hosted by the University of Bologna on monitoring the well-being of horses during flight with the objective of developing solutions to improve the experience for horses. Data loggers record a horse’s vital signs and convey them to the pilot and groom on their mobile devices.

Another trend in the airborne transportation of live animals is toward certification of the operator’s expertise and set-up. Since Air Canada blazed a trail with the development of IATA’s CEIV program for live animals in 2018 a number of players have embraced the concept. Biotrans was the first forwarder to obtain the badge last summer.

The scheme has also won the endorsement of the Animal Transport Association (ATA). Last summer the organisation signed an MoU with IATA to encourage the adoption of CEIV or alignment with it among its members.

The association is also supporting the creation of CEIV certified communities similar to developments with CEIV Pharma.

“By creating communities between our members, we can combine a number of stages in the CEIV Live Animal process which results in better collaboration between supply chain members, a commonly accepted standard, and a considerable cost saving for the participants. We are convinced that this will highly benefit the welfare of animals being shipped and reduce the number of incidents,” said ATA president Filip Vande Cappelle.

For all the progress in handling and monitoring, incidents are a sword of Damocles forever looming over companies that are engaged in moving animals by air.

Mishandling of pets, let alone fatalities, expose the affected carrier to vitriolic outpourings of criticism, hitting its reputation. After a string of incidents, United Airlines seriously considered stopping the carriage of animals in cargo altogether. It called an embargo on animal transportation while it worked with animal health experts to review all its processes over several months.

In January Qantas announced special measures to minimize the risk to snub-nosed dog breeds, which are at significantly higher risk of health complications because of their short snouts and respiratory systems.

It requires that all snub-nosed animals must be cleared by a veterinarian immediately prior to travel. It also strongly recommends owners to use registered animal shipping companies, and it announced a longer-term review of airport equipment to provide additional protection in the tarmac as well as the reinforcement of procedures designed to minimize the time animals are on the tarmac before loading.

Turning away pets would constitute a double hit on an airline’s business. As one airline executive remarked, owners who pay for their pets to travel with them are precisely the kind of customer airlines want to cultivate. In addition, animal transportation by air keeps growing, and pet traffic has shown the strongest growth in this bracket.