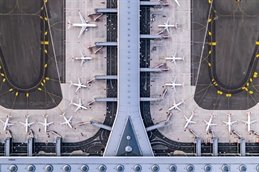 Istanbul Airport announced that it has been recognised with Level 1 ‘Mapping’ by the Airports Council International (ACI) as part of Airport Carbon Accreditation.

As Turkey's gateway to the world, Istanbul Airport was awarded an international certificate for its management and reduction of its carbon footprints as part of its environment and sustainability program.

"Istanbul Airport, which has fulfilled its obligations within the framework of the Airport Carbon Accreditations commenced by Airport Council International Europe in 2009, has obtained a Level 1 ‘Mapping’ carbon management certificate, thereby joining the global community of climate-smart airports," it said in a statement.

Istanbul Airport noted that its operations are all carried in line with its sustainability policy as it aims to reduce carbon emissions.

As part of this initiative, the airport said Greenhouse Gas Inventory Management Procedure has been re-regulated to make it compatible with the requirements of ISO 14064-1 International Standard for Greenhouse Gas Calculation and Verification Management Systems and Airport Carbon Accreditation program in order to calculate and report greenhouse gas emissions.

"All of the energy consumption data of the airport have been traceable and all of its greenhouse gas emissions have been computable since the date the airport was opened," Istanbul Airport said.

Sources of greenhouse gas emissions are also effectively-identified, and enhancement efforts are made on essential energy-consumption points.

Istanbul Airport said the Greenhouse Gas Emission Management System applications at the airport were audited by inspectors approved by Airport Council International, in line with the requirements of the Airport Carbon Accreditation program — resulting in the gateway obtaining the "Level One ‘Mapping’ Carbon Management Certificate."

“We are committed to reducing our impact on the climate”

"The subject of sustainability is at the very heart of all of the processes at Istanbul Airport ... This international certificate, which we have been awarded, is an important indicator of our sensibility on the subject of carbon emissions.”

"We have a long way to go. I have no doubt that we will receive the certificates of Levels 2, 3, and 4 upon accumulating three years of data history. As İGA, we are determined to minimize our impact on the climate by reducing our carbon footprint at Istanbul Airport. We optimize our energy consumptions which cause greenhouse gases through our effective energy management system and continually improve it through our productivity-related activities,” he added.

“Istanbul Airport's successful accreditation exemplifies the continued commitment to climate action by the airport industry – a commitment that the sector doesn’t take lightly and that shouldn’t be taken for granted,” Jankovec said.

The Airport Carbon Accreditation Program launched by ACI in 2009, is the only global carbon management certification program for airports acknowledged on a corporate scale.

Currently, 334 airports all around the world are participating in the program and reporting their carbon emissions.