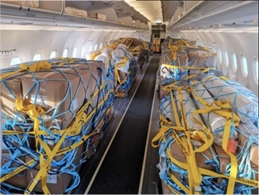 Airline officials and logistics service providers expect freighters to remain in demand, as passenger-to-freighter conversions (P2F) are also expected to continue flying cargo due to persisting capacity constraints in the market. Singapore’s Scoot has converted an Airbus A320 to a rare narrowbody ‘preighter.’

Airline officials and logistics service providers expect freighters to remain in demand, as passenger-to-freighter conversions (P2F) are also expected to continue flying cargo due to persisting capacity constraints in the market.

During a recent Transport Logistics event, Glyn Hughes, director-general of The International Air Cargo Association (TIACA), noted expectations of most in the industry that passenger numbers will not recover until 2024, but for cargo volumes to continue to surge.

Ongoing struggles in the shipping industry are also adding further pressure to the already tight air capacity — prompting the sector to resort to freighters and utilizing passenger jets for cargo to keep supply chains moving.

“IATA and many other industry groups have actually forecast that passenger numbers won’t return until 2024 – and even then, there are some questions over that – which means the situation we’re currently in is going to continue for some time yet,” Hughes, the former cargo chief at IATA, told the virtual conference.

“If we look at February and March numbers, we see that cargo has already eclipsed previous records and is actually now running ahead of 2019 levels by between five and 10 percent. Meanwhile, international passenger numbers are down 88 percent, showing the sheer size of the contraction and how long it’s going to take for the numbers to return.”

“The maritime industry is also facing some challenges — we’ve seen port congestion, we’ve seen blocked canals, we’ve seen trouble in hinterland logistics. With that, it’s fair to say that demand is up, and challenges are up.”

‘Preighters’ are here to stay

Russi Batliwala, chairman of the board at air charger solutions provider Chapman Freeborn Group, said the need for capacity will prompt continued usage of all available aircraft, especially with the rise of e-commerce, with older, converted passenger plane models to keep flying cargo even as passenger numbers tick up.

“Throughout the pandemic, everything that’s got wings is flying, but that includes very expensive and newer airplanes like the Airbus 350s, Boeing 787s, and 777s, and these will be the first ones that will be reconverted and go back to operating with passenger,” Batliwala said.

“If I compare where we are now to six months ago – and I never thought I’d say this – but I actually think preighters are here to say,” he added.

Batliwala noted that the ‘preighters’ that will continue flying are “not the expensive, business class, first class, premium economy type of aircraft” but more likely the types of passenger planes used by non-legacy carriers “with seats taken out” and that these “maybe older aircraft like A330s, A340s, A340-600s, and so on. We’ve seen that integrators are now using these aircraft and I think e-commerce is using them quite a lot as well,” he said.

Cargo airlines to be in demand

Meanwhile, Konstantin Vekshin, chief commercial officer, Volga-Dnepr Group in London, noted that as the world recovers from Covid-19, the industry is unlikely to be the same and that there will be more attention to dedicated air cargo capacity moving forward.

“The world is unlikely to be the same. Based on what has happened to the world in the last year, I’m sure that every shipper, every manufacturer, every freight forwarding organization will think twice before they commit to something related to just belly cargo or preighter-related capacity in the near future,” Vekshin said.

“Everybody, I think, will be more inclined to think in terms of dedicated air freight capacity longer term. We’re likely to see more and more commitment from the traditional manufacturers and shippers to dedicated air cargo capacity with the simple reason that nobody is willing to take any chances with what we’ve already witnessed,” he said.

Vekshin warned, however, that there must be caution in pursuing the preighter strategy, saying that it could create issues for the industry.

“If you look at the recent complications that have affected quite a few airports, It’s our belief that one of the reasons why we’ve seen that congestion is because of the unprecedented number of preighter flights, which the people on the ground – the cargo handlers – basically couldn’t handle that much in such a short notice,” Vekshin said.

Separately, an executive at global aircraft charter provider Air Charter Service (ACS) said the demand for extra capacity will be dependent on the need in the market.

“So long as travel restrictions remain in place suppressing demand for passenger travel, there will remain a shortage of capacity in the market and the need for any substitute, be that full-freight or preighter,” Steve Fernandez, ACS regional director – APAC in Hong Kong, told Asia Cargo News.

“Our outlook is that pricing has stabilized for the summer months, which would traditionally see softer demand than other times of year. However, we expect September until the end of the year to see an even further tightening in already limited capacity and a corresponding escalation in prices. Price escalation is likely to be compounded by increasing fuel costs,” he added.