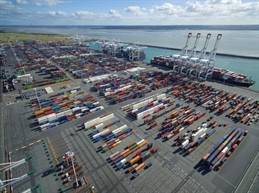 After implementing its Bornes & Eau (Water Supply Terminals) programme along the Seine Axis, HAROPA PORT has added another dimension to its environmental ambitions with quayside connections for electricity supply.

In a statement, HAROPA PORT — the maritime complex comprising the ports of Le Havre, Rouen and Paris — said it has started work on achieving the goal of enabling cruise ships to connect to a landside electricity supply during their calls at Le Havre.

It said what is currently Hangar 13 on the Pointe de Floride will be redeveloped to house high-voltage distribution equipment along with conversion systems to adjust quayside supply to the needs of ships.

A network of underground cables will be laid to take current to carriers, each weighing 15kg and providing five connection points on articulated arms for provision of supply to vessels irrespective of their location along the cruise terminal's three quays.

HAROPA PORT said the electrification of Pierre Callet quay will be operational as early as the 2023 season and represents the first phase of what is a large-scale project.

The port complex noted that an investment of €20 million has been earmarked for this project, which also benefits from €11.1 million in support from the government's Economic Stimulus Plan, plus a contribution of €0.9 million under the Territorial Pact for Ecological and Inclusive Transition.

HAROPA PORT said it has ambitions to be the first Northern European port to be able to supply 30MW to cruise ships.

It said electrification of the Port 2000 quays will unfold over the period to 2028, following the protocol of agreement signed on 21 June 2021 between the five Northern Range ports: Antwerp, Hamburg, Rotterdam, Bremerhaven and HAROPA PORT.

"The energy transition has been made central to our strategy. This means that HAROPA PORT is setting out to be among those who want to speed up the pace of reduction in greenhouse gas emissions," HAROPA said.

"These investments reflect our determination to 'green' our activities and those of the users of our port. Our objective is clear: we want to be a clean, carbon-neutral and positive-energy port by 2040," Stéphane Raison, CEO, HAROPA PORT said.